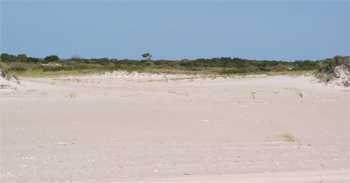 One of my favorite places to visit is Assateague Island National Seashore in Maryland. Since I go there a lot, I plan on writing a bunch of articles about Assateague here in the blog, so today’s post is more or less a primer on Assateague Island. 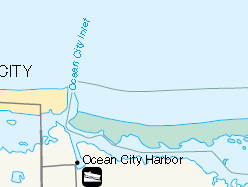 Assateague Island was once part of a large island and was connected to Fenwick Island at the north end. A strong Nor’Easter storm in the 1930’s cut open and channel from Sinepuxent Bay to the Atlantic Ocean at what is now the southern tip of Fenwick Island in Ocean City, MD. This channel gave access to the Atlantic Ocean to the small sleepy fishing town of Ocean City. Because of the economic value this cut offered to Ocean City fisherman, the channel has been maintained and dredged continually since it formed and has major long term environmental impacts on the natural flow of sand onto Assateague. The northern end of the island now has very little vegetation, and is at risk of washing away. While the southern tip of Ocean City is one of the widest parts of the town. Much of the sand that should be passing southward to Assateague Island washes into the channel, and deposits in shoals in Sinepuxent Bay. As you can see from the picture in the map above, the northern end of the island has shifted west as the natural currents have moved the sand on the ocean side southward, and the sand from the channel has deposited in the bay behind the island. Take a look at this satellite imagery of northern end of Assateague Island to see this shift and the sandy shoals in Sinepuxent Bay behind Assateague.

Once planned for development, the original access to Assateague Island was by ferry from South Point. Because of the access issue the development was slow, and by early 1960’s there were only a few homes on the island. The developer knew that a bridge was needed, so donated 600 acres of land to the State of Maryland for use as a park. The plan worked, and the state built a bridge to the island to build the park. Development of the island picked up pace after the bridge was opened but things went afoul in 1965 when a 3 day Nor’Easter washed back and forth across the island destroying all but a handful of homes.

While talk of protecting Assateague Island as a park had gone on for 3 decades, the Nor’ Easter of 1965 was pivotal in bringing the topic of preservation of the island real consideration, and in 1967 the island became Assateague Island National Seashore. But that wasn’t the end of plans for development. The legislation enacted to create the park allow for some development on the island. It wasn’t until 1976 that through the work of Judith C Johnson and hundreds of others, that the federal authorization legislation was changed to remove the allowance for development.

Assateague Island is famous for the herd of wild horses made famous through the book ‘Misty of Chincoteague’. Visitors to Assateague Island are fascinated by these free roaming horses and it’s one of the major reasons the people go to Assateague. The horses have a hard life on the island. Vegetation is poor quality, in the winter there are harsh chilling winds, and in the summer there are biting flies and mosquitoes to contend with. The Maryland herd is managed by the National Park Service and the Virginia herd is managed by the Chincoteague Volunteer Fire Department. The Chincoteague herd population is maintained by auctioning off some of the ponies at the end of each July. The horses are rounded up and swim to the Chincoteague Island to be sold. To help pay for the costs associated with managing these wild ponies in the Maryland Section, you can donate to provide foster care for them at Assateague Coastal Trust Foster Program. The foster program lets you choose a horse, and they’ll mail you a picture of the horse, along with a certificate in a nice booklet. They make great gifts for children’s or family member’s birthdays and you’ll be helping out a good cause.

This site uses Akismet to reduce spam. Learn how your comment data is processed.